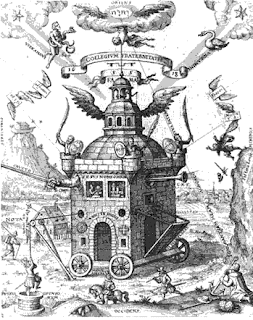 I get that it can be kind of lame to gush about how super awesome your role playing games are, whether leading them or playing in them. As I'm (relatively speaking) new to the role playing universe, I've never really gotten that - if something is awesome, you should share it with others and without reservation. Especially when it comes to the intertubes, where it's super easy to scroll past things.

On my books/games/music blog a year and change ago, I wrote about how I'm a spoiled gamer, how my gaming experiences have been superior essentially since the beginning. I'm in a great D&D game with great people (and we're actually porting to 13th Age and I can't wait to talk about it), and my friend Mike (of Renfusa) has run a series of games with this core group for a number of years now, in which I joined in with his Mage: The Awakening game in the beginning. Mike is a Harvard-educated historian, a person who's research and storytelling skills make me feel meek and feeble, and is also a diabolical mastermind who makes Lovecraft's worst fever dreams appear normal and pedestrian. To get an idea as to where he comes from, you can read his gaming idea Tumblr, and specifically his essay following the death of my Mage character, Ernst. For those who don't click through, our Mage game takes place in 16th century Prague under the reign of Emperor Rudolph II, who may be known more for his interest in the occult more than his actual governance (which explains why this time frame is a perfect setting for Mage).

I don't write this and share here for the sake of praising my friend for his ability to craft an excellent game, though. I could do that any day at any time, and don't enough. The reason I write is because of the really deep impact playing on Tuesday night had for me. It brought me back into why I wanted to role play back in high school when I first learned of it, and why, as a 31 year old adult with a mortgage and a sick parent and more responsibilities than he can handle, continues to play games with dice and inhabit other human beings - to learn more about himself. Follow for some master-level navel-gazing...

Some backstory for those who are not clicking links - Ernst is both a lot like me and not like me at all. He's a fundamentalist Christian, a war hero, a desk jockey, a loyalist. He's both well-ingrained and accepted within the community he resides, yet does not at all fit in with those around him. He's deeply devout, yet increasingly skeptical. Spiritual yet grounded. He, like a real person, is complicated and inconsistent in his drive to be simple and predictable. I don't pretend to be the best, or even necessarily good, at playing him as a character, but he's interesting to me, and I play Mage with people who bring out the best and worst in him.

The key to the game being set in Prague is that the city, and the Emperor in turn, is at the center of all kinds of mystical and magical happenings. The underlying theme/goal/point up to this stage is the wonders of the lost island of Atlantis. The story has dove into the Atlantian mythology on and off throughout (including Ernst's death), and we're at the point of our story where the cabal of mages have made it to Atlantis and are exploring its secrets. The secrets are many, and are confusing, and the cliffhanger we left things on were after learning what, in game for Ernst as well as out of game for me, the horrors of the Atlantian utopia truly are (for game purposes). Think Cylon/Matrix clone pods, folks. Just wrong, gross things.

Ernst, being deeply religious, doesn't care much for this sort of eternal life, believing his true reward comes after death. Already conflicted from his successful attempt to save himself from what he truly believed was certain doom in the story linked above, the horrors are revealed and he spends the final scenes of the evening petitioning his cabalmates to leave this horrible, no good, very bad place. The p1eading doesn't completely work. The situation might split the cabal for good. Who knows? 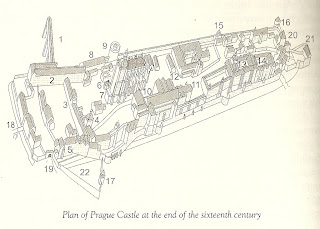 Why then, did this situation make me feel physically ill in that cleansed, vented sort of way? It was strange and unexpected - without going into too much detail, it has been a harrowing last year for me after what has really been a pretty bad mental 4 years for me. I've spent an unhealthy amount of time in my own head, trying to figure things out, perhaps redefine myself or at least learn to like and respect the myself that I am. Some of us never get to that point in our lives, and some are unlucky enough to never get out once we're in the muck and the mire. Sometimes it takes a lot of good friends, a lot of expensive therapy, or a lot of both.

Ernst, in a sense, has inadvertently embodied a lot of that angst and lunacy that I've experienced lately. Like myself, Ernst has had to try and keep his mind straight when the world around him has spun out of control. Ernst has commonly felt out of place in a setting where he should fit right in. He's consistently worried that he's ruined relationships he's created, bonds he shares simply because he makes a questionable decision or believes what his peers may consider the wrong thing.

And at the end of the day, Ernst's cabal is still there.

Gaming for many is an escape. My wife, for example, plays D&D primarily because she likes to kill things. Mike creates more worlds than he has players to place in them, more settings than there is time to play. I thought I gamed because it was a fun time with people I enjoyed being around - and it's true, I do game with that in mind, and I do enjoy the company of friends. It turns out, though, that gaming is that mental outlet I've sought out all these years as well. It's an interactive way to experience a lot of what life throws at us, and to kind of work through it in a safe, often obnoxious, seemingly unrelated environment. Plus, it's a safer space than ever because, at least for me, the character is an analogue and you don't even know it - maybe your peers do and they're not saying anything (and bless them for it), or they don't and it's fun for everyone.

When things get really dark, it's difficult to appreciate the good things in life. Ernst's realization as to how wrong things had gotten, yet another realization in a long line of poor choices and terrible outcomes, came at a very opportune time for me. I, too, have spent a good deal of time in that place as of late and, as Ernst stood there, pleading for the more reasoned, rational character in our game to remain true to who he is and walk away with him, I sat there as well, realizing a lot of things about myself and recalling the expectations of others that I've had and lost.

I can guarantee that Mike didn't intend this when creating the game. I've firmly believed that the best art comes not from its intended message, but how that message impacts the reader. It's not that High Fidelity or Stargirl are good books on their own, but that they speak to a certain audience in a certain identifiable way that simply cannot be predicted or intended by their authors. Sure, they know people will see themselves in their literature, but the extent cannot be known or predicted or guaranteed. I was the chief creator of Ernst, but I didn't create the world around him. Ernst was bound to share some character traits, but there's no guarantee that he would react in a way that would impact the person playing him, either.

What's the message in this ramble? I think it's the application of fantasy and hobby with reality. I read a lot because I'm looking for that gem that speaks to me, that impacts me in a certain way. To improve myself. The best movies do the same, the best music, the best video games - they all elicit a feeling beyond that dopamine hit. The way I've found it in a World of Darkness game was unexpected and revelatory. We spend a lot of time talking about the hobbies and collections and...stuff that we love, and it's a good thing to take a look at all those things and realize how they define us as people, and how we learn from what we do and who we are when we're busy outside of ourselves taking part in things we're not and characters that we aren't.

This week was a great reminder of all that we are. That it took a fictional 16th century war hero who can control the spirits of the universe to do it is just icing on the cake.
Posted by Jeff Raymond at 7:30 AM